The Herd is available to pre-order now in the UK:

“It is hard to imagine a more timely novel.
A fascinating exploration of all sides of a particularly knotty, politicized issue.“ 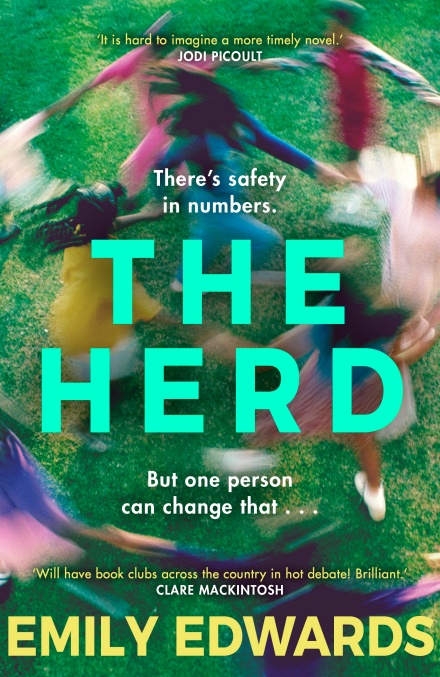 You should never judge how someone chooses to raise their child.

Elizabeth and Bryony are polar opposites but their unexpected friendship has always worked. They’re the best of friends, and godmothers to each other’s daughters – because they trust that the safety of their children is both of their top priority.

But what if their choice could harm your own child?

Little do they know that they differ radically over one very important issue. And when Bryony, afraid of being judged, tells what is supposed to be a harmless white lie before a child’s birthday party, the consequences are more catastrophic than either of them could ever have imagined . . .

The Herd is published in the UK
by Transworld, Penguin Random House

“Will have book clubs across the country in hot debate! Brilliant.“

I can remember the exact moment I felt the first spark of an idea for The Herd. It was the sweltering summer of 2018 and I was bouncing on a birthing ball, crotchety and swollen, nine months pregnant with our first son in our overgrown garden, watching my husband James and Sophie, our birth doula, argue.

I’d pushed for us to choose Sophie – she was the kind of mother I wanted to be. Strong, unafraid and incredibly kind. Alternative, yes (she had a yurt in her garden where she’d perform rebirthing rituals), but her life choices were rooted in experience and her shelves were heavy with books about birth and parenting. They were arguing because Sophie had just asked us whether we intended to vaccinate our baby. Honestly, I hadn’t thought about it properly yet, but was eager to hear Sophie’s wisdom, while James scrunched up his face as though her question had released a terrible smell.

‘Yes, absolutely we are. One hundred per cent yes,’ he said, without even looking my way. Sophie smiled her calm smile at him, the one I’d seen her use with her young kids.

‘Did you know, James, the UK has one of the most concentrated vaccine schedules in the world? By the time your little one’ – she placed her warm hand on my bump – ‘is four months old, they will have had twenty-three vaccines? At eight weeks old their immune system will be flooded with aluminium – over two hundred times the recommended weekly intake, in one injection.’ I felt our baby twitch.

James’s eyes widened. Sophie’s opinion, I knew, riled him. But James is a history buff, so he came back with: ‘So we should leave our child vulnerable to the diseases – diphtheria, polio, measles – that maimed and killed so many of our grandparents’ generation?’

‘When was the last time you heard of someone contracting polio in this country?’ Sophie asked, still calm, still smiling.

James almost shouted, ‘That’s because of the bloody vaccines!’

That was it. That was the moment. I stopped bouncing and stopped listening to the row. The choice was terrifying. If we vaccinated, we were – according to Sophie – risking damaging our baby’s nervous system, or, if we chose not to vaccinate, did we cross our fingers and hope they didn’t con- tract meningitis? I was entirely responsible for this new little life, but also helplessly out of control. And that was the moment the idea for The Herd was born.

I had to wait another two weeks for our son.

I started my research a few weeks later, chatting to parents at baby groups and in the park. I heard stories about best friends who no longer speak because one did vaccinate and the other chose not to. I heard of relationships pushed to the brink. I spoke to my ninety-two-year-old friend who shared memories of the night her sister died from polio, and to a father whose one-year-old stopped making eye contact a couple of weeks after he had the MMR. I sat at dinner tables where the topic is banned. For some, it’s just too painful.

I spoke to anyone who’d talk to me about vaccines. And beyond the noise of the anger, the outrage that people could be so ignorant, so selfish, so stupid, I’d noticed the same quiet panic I’d experienced that humid day in our garden. We all just want to do the right thing for those we love and we are terrified of getting it ‘wrong’. I hope I’ve managed to convey this in the novel.

We have chosen to vaccinate our sons and I believe it was the right thing to do; both for us and to help protect others. That doesn’t mean I didn’t dread the moment the needle entered their soft bodies. But I knew it would be infinitely worse to watch them contract measles, meningitis or whooping cough – knowing I could have prevented their suffering.

The timing of this novel has been extraordinary. I wrote the lion’s share during the first 2020 lockdown. I’ve never known a time when our individual choices could directly and catastrophically impact others so profoundly. Learning about all this in theory and watching it play out in practice across the world has been the education of my life.

I really hope you have enjoyed reading The Herd as much as I enjoyed writing it.